Info Sunset Over the Blowdown

Sunset Over the Blowdown 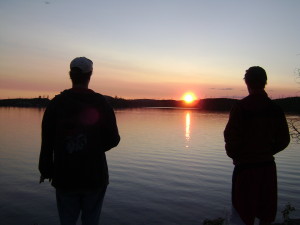 Fourteen years after a derecho hit the Boundary Waters Canoe Area Wilderness  visitors are blessed with a beautiful sunset on the shores of Sea Gull Lake. WIth an abundance of dead standing trees left scattering the horizon, amongst a forest of new growth, and large rock faces exposed from uprooted tress and forest fires, visitors get the experience of feeling like they’re anywhere but Northern Minnesota.

“Looking around I felt like i was somewhere in the Southwest United States, some spots look more like Utah or Arizona than Minnesota”, said a paddler who had just finished the Sea Gull, Knife, Saganaga loop.

For those of you unfamiliar with what a derecho is, it is a natural phenomenon that occurs when  long-lived straightline winds create a swath over 240 miles and cause wind gusts over 60 miles per hour. Essentially creating tornado and hurricane force frontal winds that can blow down just about anything in its path. In 1999 one such phenomenon hit a thirty square mile area between Ogishekemunchie and Sea Gull Lake. Blowing down nearly every tree in its wake. After the storm there was great concern that a forest fire could hit the massive amounts of fuel that is now sprawled across the forest floor. Luckily that has not yet happened, and preventative measures such as prescribed burns help to keep this area safe and open to visitors.